The craft filmmakers Frank Baumer and Andreas Matthes from Abensberg in Bavaria were our guests in March 2020 to shoot the first episode of the series “Innovati.on.Tour”. The series presents innovative companies from the craft trades which, due to their positioning, serve as role models and inspiration for others. For the pilot episode with the focus on “Metal” the film team decided to work with us. After the craftsmen filmmakers had already created a company portrait of MetallArt for the international crafts fair IHM in 2017, we were all the more pleased about the renewed cooperation.

In the following interview with Andreas Matthes, which was published on April 2, exciting topics such as employee recruitment and retention, the development of innovative business ideas, as well as specialization and marketing will be covered. We are very pleased to be able to present the successful results of the cinematic road trip to you at this point. We would like to take this opportunity to once again thank Die Handwerksfilmer, B3 Mediagroup Bewegtbildkommunikation, handwerk magazin, the Munich Association, Vector Informatik GmbH and all other contributors! 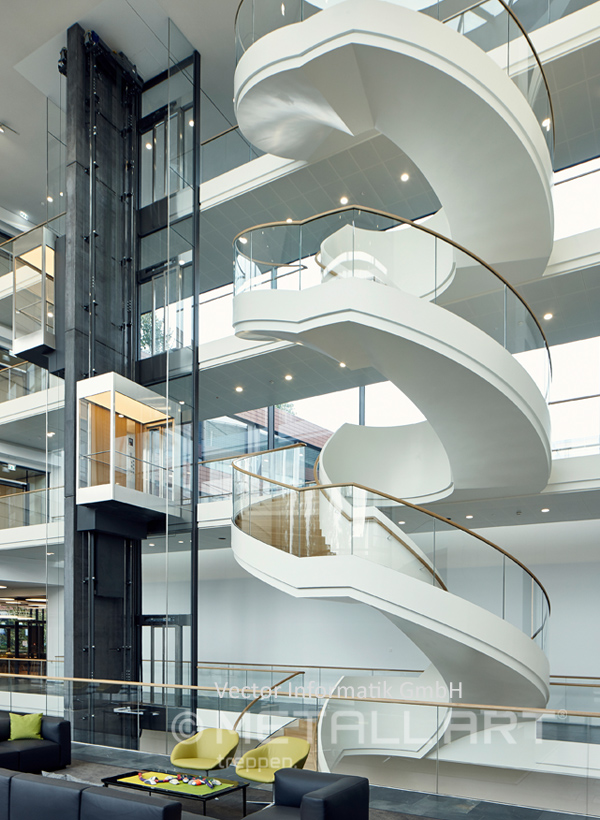 Before the shooting team took a look behind the scenes of our company, they first went to Stuttgart. More precisely, to the renowned and internationally active manufacturer of software components and tools, Vector Informatik GmbH in Stuttgart-Weilimdorf. In Vector’s generously designed entrance area, a rounded staircase with steel soffit cladding and parapet-high stringers from MetallArt, which extends over four floors, served as an impressive film backdrop. More information about the staircase here.

At the beginning of the shooting, our protagonists experienced a short period of nervousness and tension due to the unusual situation. But thanks to the handicraft filmmakers, this was soon overcome. After the filming was finished in Stuttgart, we went to Salach. There some sequences were shot in the production department and you could also have a look over the shoulder of the experienced employees in the technical office.