For a humanitarian transport to the Ukrainian border the company collected a great number of medical kits.

Commitment for a good cause

When our fleet manager Martin recently saw the terrible news from Ukraine in the media, he knew that we should help! With the help of a friend at the German Red Cross, a regional relief initiative was quickly found. The forwarding company Raff from Weilheim organises transports of relief supplies to the Ukrainian border time and again. Due to the dramatic situation in the war zone, dressing material is one of the urgently needed supplies. The suggestion to collect the dressing material available at MetallArt for the aid transport met with an open ear from the management.

All available first-aid boxes and also larger first-aid lockers were gathered in the production and shipment departments and also in the MetallArt administration. In addition, the first-aid boxes in the company’s vehicles were collected. Martin also took the opportunity of the upcoming staff meeting and informed all assembly teams and nationwide employees who came to Salach for the occasion. Thus, additional first-aid material was added at short notice and also employees who do not drive a company vehicle themselves could bring private car first-aid kits and support the campaign. A total of 44 car first-aid kits, 8 workshop first-aid kits and 3 first-aid lockers were collected.
Marco Paulus, who works as a volunteer paramedic for the German Red Cross in Göppingen, picked up the kits at the end of March and was very impressed by the huge amount. “We rarely get so many first-aid kits from a single collection point!”

Just three days after the pick-up in Salach, Martin received the news that the transport had reached the Ukrainian border region and the dressing material could be handed over to the responsible organisations on site.

Many thanks to Martin for this idea and the effort! We are glad that we could contribute to the support for Ukraine with this action. 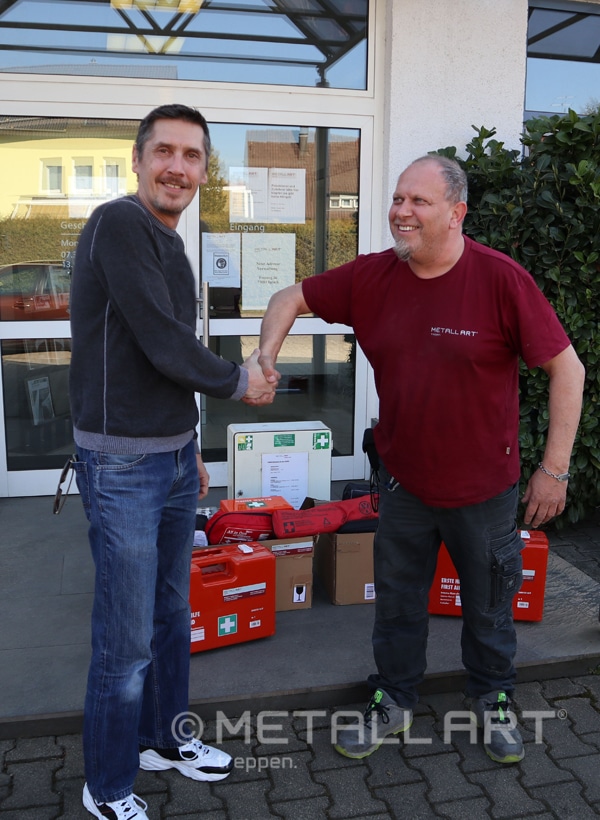